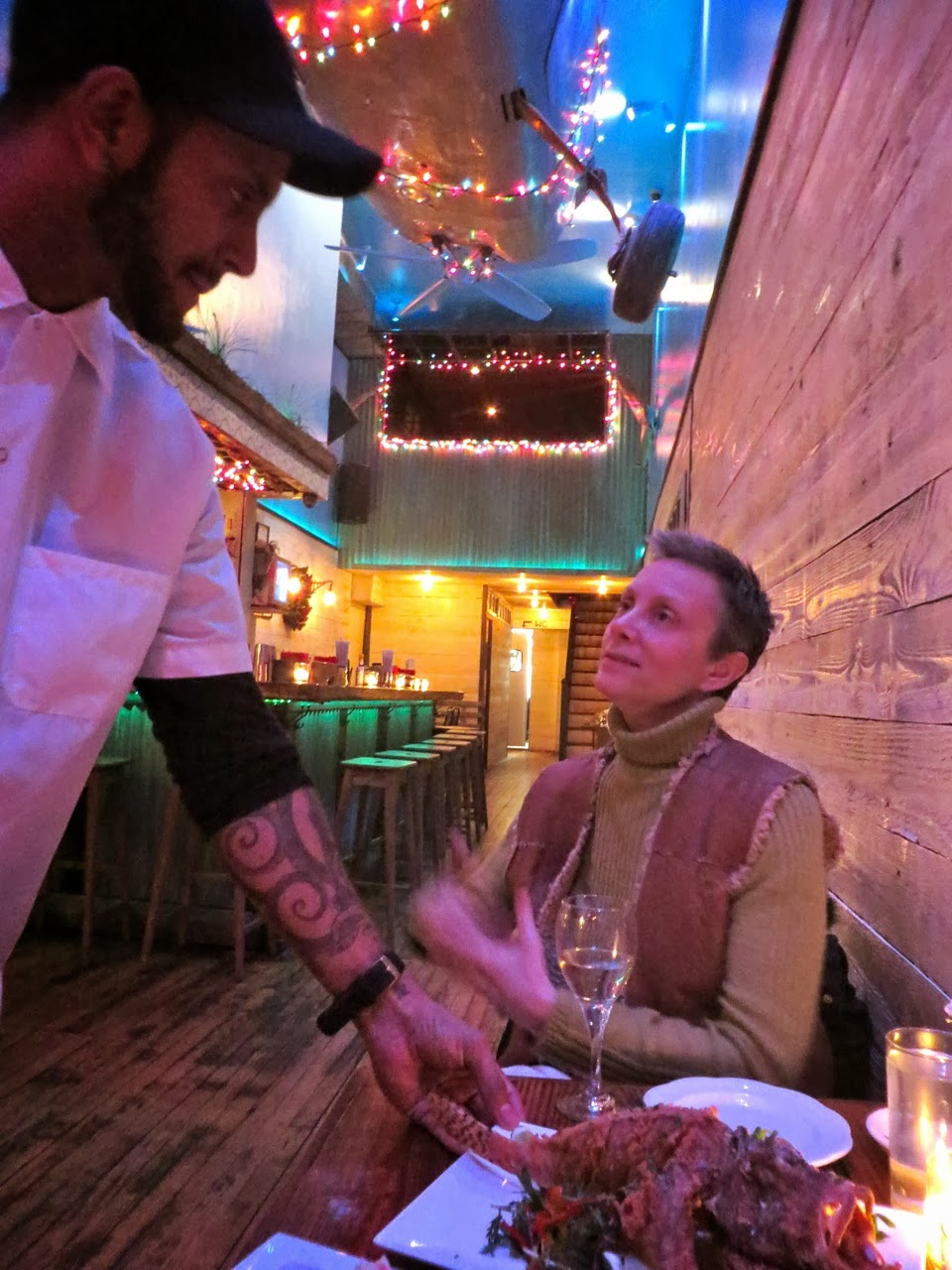 that is hoovering up fish populations, including shrimp and ecologically important parrotfish that destroy algae, all along the Atlantic Coast. Surely, the voracious Lionfish deserves to be caught and eaten in restaurants, but so far Norman’s Cay is about the only restaurant brave enough to try. Theirs comes from Nassau.

Perhaps because it is wildlife, not a farmed fish, it tastes wild—and like a cross between grouper and red snapper. Norman’s Cay does fried Lionfish tacos garnished with guacamole and slaw. The whole fish is presented stunningly, surrounded by leafy greens and chunks of lime. It is beautiful to behold: the handsome pterodactyl head rests on a pedestal of molded peas and rice.

Coconut Shrimp with mango chutney is probably a classic there. However, we started in stride with tender and delicious Conch Fritters served with three sauces and quaffed a stylish cocktail called the Midnight Run: tequila, Licor 43, lime and bitters. Then, salad with Bahamian Christophine (also known as Chayote, between a fruit and a vegetable) shaved onto Valencia oranges, hearts of palm, and avocado, in a sharp vinaigrette. Our much-anticipated Lionfish experience began with senses awakened and tingling.

It is admirable what Norman’s Cay is doing for the planet, and there’s more than a little sense of adventure here. A1966 Cessna Skyhawk, purchased from Craigslist in Dayton, Ohio and driven east, hovers overhead. We felt like we were in the Bahamas even though it was cold outside. 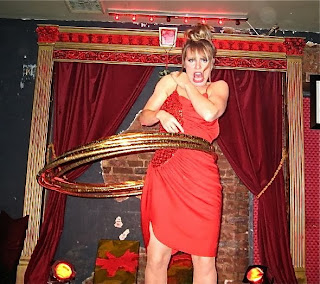 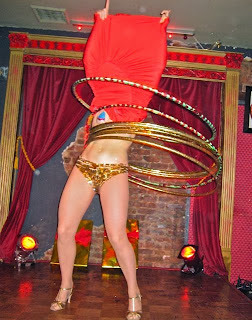 Burlesque is going through a renaissance that is pro-woman, unpredictable, and very funny. For instance, the Lower East Side was a testing ground for world-class performer Narcissister. We saw her groundbreaking Marie Antoinette routine a few years ago at the former Corio Supper Club.

One hot burlesque venue is Le Poisson Rouge, a little further north. The Box is late-night in every sense of the word. The Slipper Room and Nurse Bettie present classy and classic burlesque in midweek as well as weekend shows. Speaking of funny, Moonwork, pop-up stand-up comedy with beer served, is back up and running at Clemente Soto Velez Cultural Center.

The arty cabaret entertainment we have just recommended is witty and decadent in an almost wholesome way, but we’ve never found the food served to be anything exciting. Norman’s Cay is open some nights till 4 a.m., so you can begin or end your burlesque evening there.
Posted by Linda Olle and Jensen Wheeler Wolfe at 3:27 PM

Betrayal and the Hotel Edison Cafe


Betrayal unfolds in reverse order to tell the story of an affair between a married woman and her husband’s best man and best friend, breaking up in 1977, and back to when it all began. Mike Nichols directs and infuses it with a lightness we don’t remember from last time we saw it and judged the play dated. Descending and sliding sets, particularly an Italian restaurant banquette where the two men get drunk together, are clever and convincing—though Nichols mysteriously omits the fun, 1968 party scene and gives us the three principals in a room off to the side while the party goes on, drinking (there is alcohol in every scene) and smoldering.

Husband and wife are embodied by glamorous real-life couple Daniel Craig and Rachel Weisz, who are great to see onstage rather than in the cinema. For one thing, they are life sized, no larger—or maybe it’s the roles that make them seem so. Weisz begins things on a shrill note that her character then has to spend the play recovering from. Craig, in a long-haired wig, must portray a prick who cheats on his wife. As soon as the play closes, he will return to being James Bond—a morally unencumbered role.

The betrayed party is not the husband, as you would think, but the best friend and best man, when he finds out in act one that his buddy has known about the affair for years and done nothing. The best friend, played by Rafe Spall, is natural and appealing, in the role the playwright identified with, and he knows how to do the Pinter pause. Harold Pinter wrote Betrayal in 1978 about his own affair, and it has the messy reality that a made-up play might not.


The Hotel Edison has appeared in recent fiction as a trysting place. The café has been around the block too, yet maintains the appearance, the portions, and even the prices of an earlier era. There are several versions of club sandwich, and pastrami and corned beef, served with a side of coleslaw and crisp pickles. Salads and the blintzes are very popular on the vast menu with four homemade soups every day. Theatre and film people are regulars. (Robert Forster, of Quentin Tarantino’s Jackie Brown, was there when we were.) The restaurant’s manager, Conrad, told us “James Bond” (Daniel Craig) sometimes drops by from the Ethel Barrymore Theatre across the street for a carryout quart of chicken soup.
Posted by Linda Olle and Jensen Wheeler Wolfe at 6:41 AM