The Nutcracker, The Trocks, Chocolate Room and Buvette 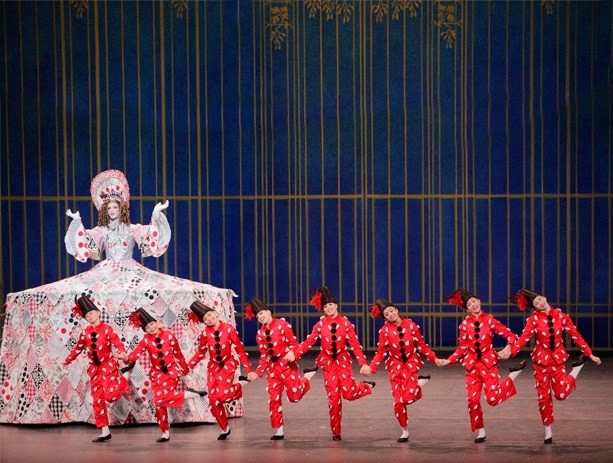 In Alexei Ratmansky’s interpretation of George Balanchine's The Nutcracker™ rather than starting in the parlor, the curtain rises on a scene in the kitchen where mice are scattered about. Justin Souriau-Levine as the small, mischievous mouse who hides in the soup pot is superb.

The story unfolds to a more traditional telling, but American Ballet Theatre’s mixes fantasy and reality. There has been some criticism of the male bees pollinating the dancing flowers. It’s fun and unexpected. Richard Hudson designed both the gorgeous costumes and set, with Clara’s sky-high bed and the dramatic lopsided house we see at the beginning and the end. Ratmansky’s production moves permanently to the West Coast for the holidays of 2015.

We left humming Tchaikovsky. "Did it entirely hold your attention?" I asked 9-year-old Arden. “It would probably be better for ages 10 and up,” she said. 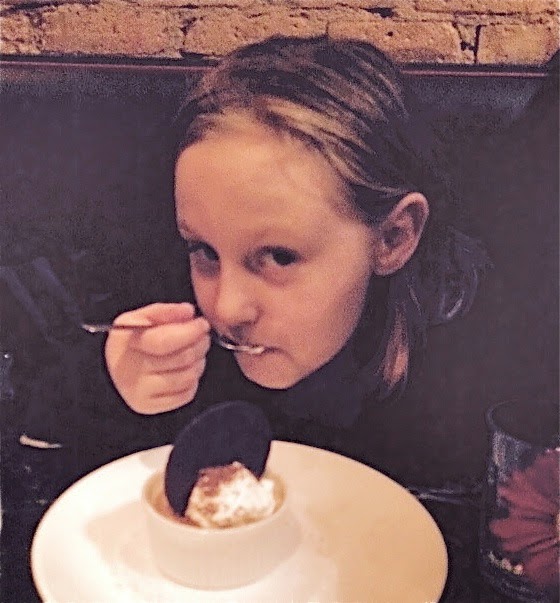 After the Nutcracker, we went to the Chocolate Room for a post-show treat. Close to BAM, it is open late (11pm). The dense three-layer chocolate cake that Oprah raved about is simple and not too sweet. My daughter’s favorite was the black bottom butterscotch custard with a strata of bittersweet chocolate and whipped coconut cream. The friendly staff offers chocolate samples while you wait. 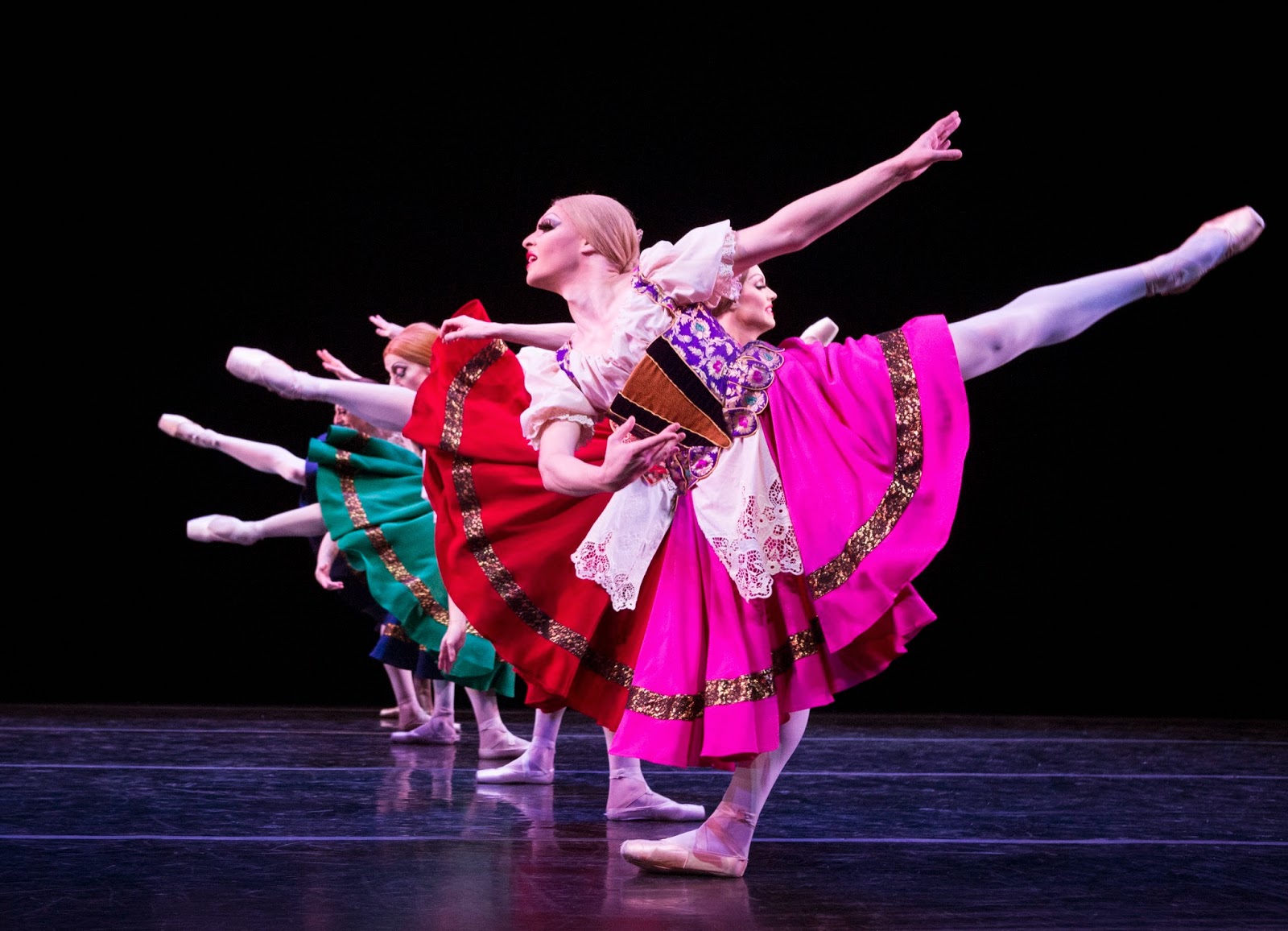 Arden thought that Les Ballet Trockadero de Monte Carlo could be funnier. Of course, she’s grown up seeing men in drag on the stage, and The Trocks could not sustain the gag for her. With only a limited exposure to Russian literature, she’s forgiven for missing the humor in the troupe’s stage names, like Natalia Notgudinov and Ida Nevasayneva. (All the dancers have Russian bios in the Playbill.)

Seeing men en pointe was a sensation when the company started forty years ago. Robert Carter, who dances the lead swan, has been with the Trocks for twenty years—long career for a ballet dancer, and he’s still got it. Go For Barocco with music by Bach opened the second act and is a strong piece more focused on the dancing and less on being funny. Laszlo Major who plays a very male male in Le Corsaire Pas de Deux is stunning  and can turn like a dream. The Trocks have a loyal fan base and are sure to continue for many years to come. 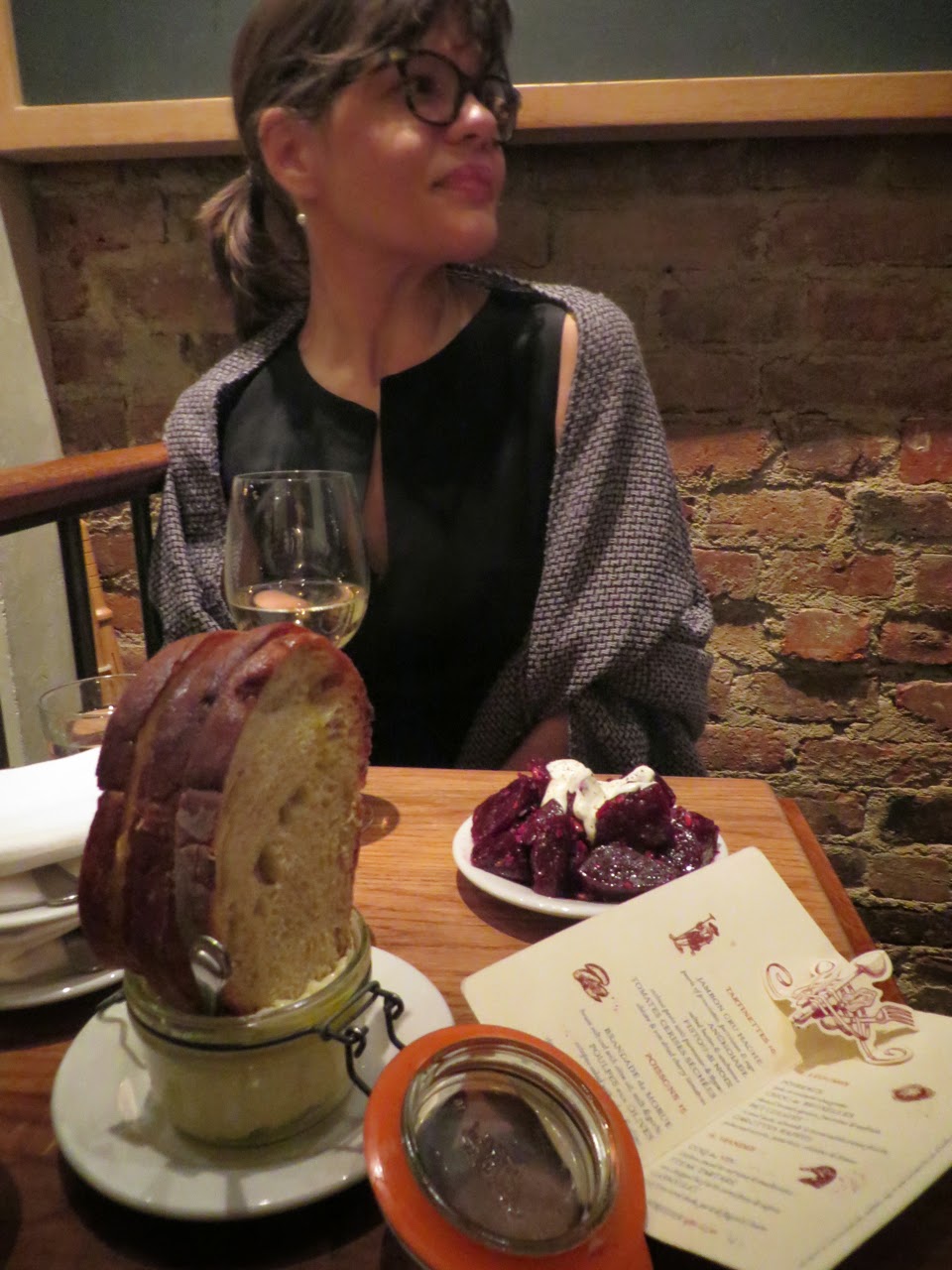 While most NYC restaurants are staffed by actors, Buvette, not far from the Joyce Theatre, has a wait staff full of writers. The first to get a book contract moved on. Waverly is in the midst of writing her novel, and Beck behind the bar is starting his.

What is it about Buvette? The tiny bistro is constantly packed, serving small plates off a petite menu. Cassoulet ($16) is colorful and warming, served in a round deep bowl. Salad beets were condensed in flavor and well seasoned. Brandade de Morue is served in a glass container with the toast standing up in it. About the only choice for a child was the Croque Monsieur ($12). Buvette's waiters did seem especially articulate when, instead of asking, “Are you still working on that?” they say, “Are you still enjoying that?”
Posted by Linda Olle and Jensen Wheeler Wolfe at 2:44 PM

The Dog in the Night-Time and the Osteria al Doge 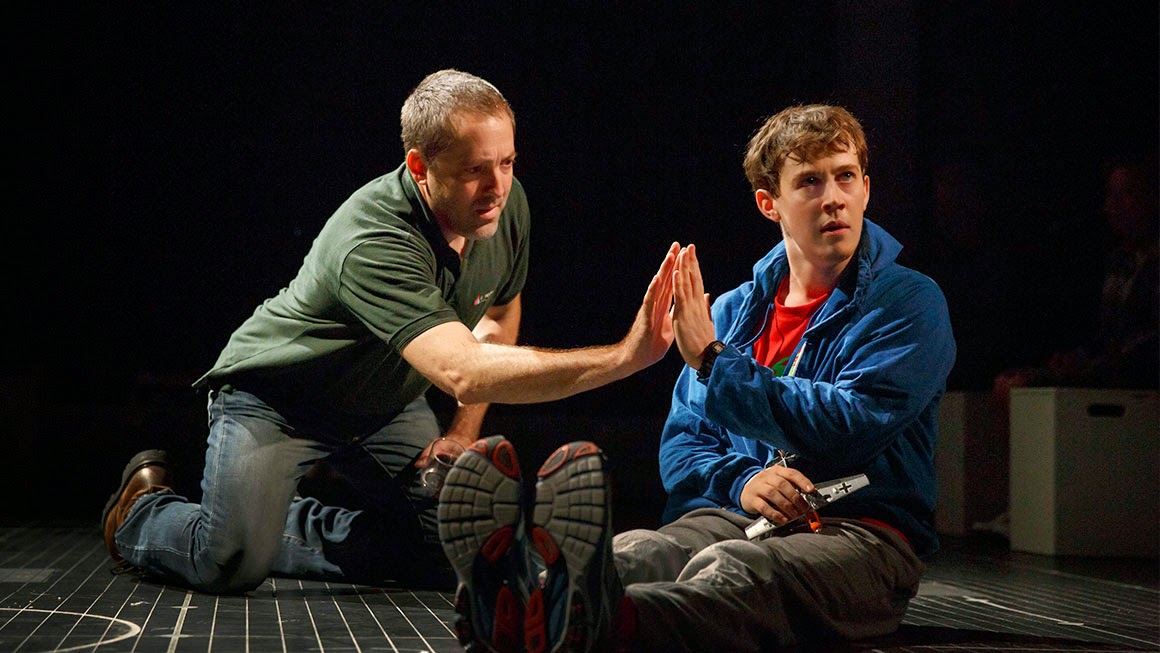 The Curious Incident Of The Dog In the Night-Time begins when a neighborhood dog is killed and an autistic, 15-year-old boy tries to find out who is responsible for the crime. Christopher is highly intelligent and passionate, but ill equipped for such a task. As a savant, his awareness of numbers and facts is heightened, and he can't stand to be touched. We empathize immediately with his struggle with everyday interactions.

The story is told through narration and the ingenious set. Walls and floors are a grid pattern and become alive with secret compartments, train platforms, glowing boxes and a tube map as Jonathan’s search leads him to London. The dramatic scene in the station where he’s misplaced his pet rat is the sort of terror most of us hope never to witness in real life. Jonathan recites prime numbers to calm down and continues his search. At one point numbers take over the set as they take over his mind.

The actors are really good and Alex Sharp as Christopher is superb. We root for our hero in his honorable struggle for the truth, and we are anxious that he makes it back home. Based on the incredible book by Mark Haddon, which was popular with teens and adults alike, the unlikely but successful staging by the National Theatre of London received seven Olivier Awards including Best Play and is still running on the West End. 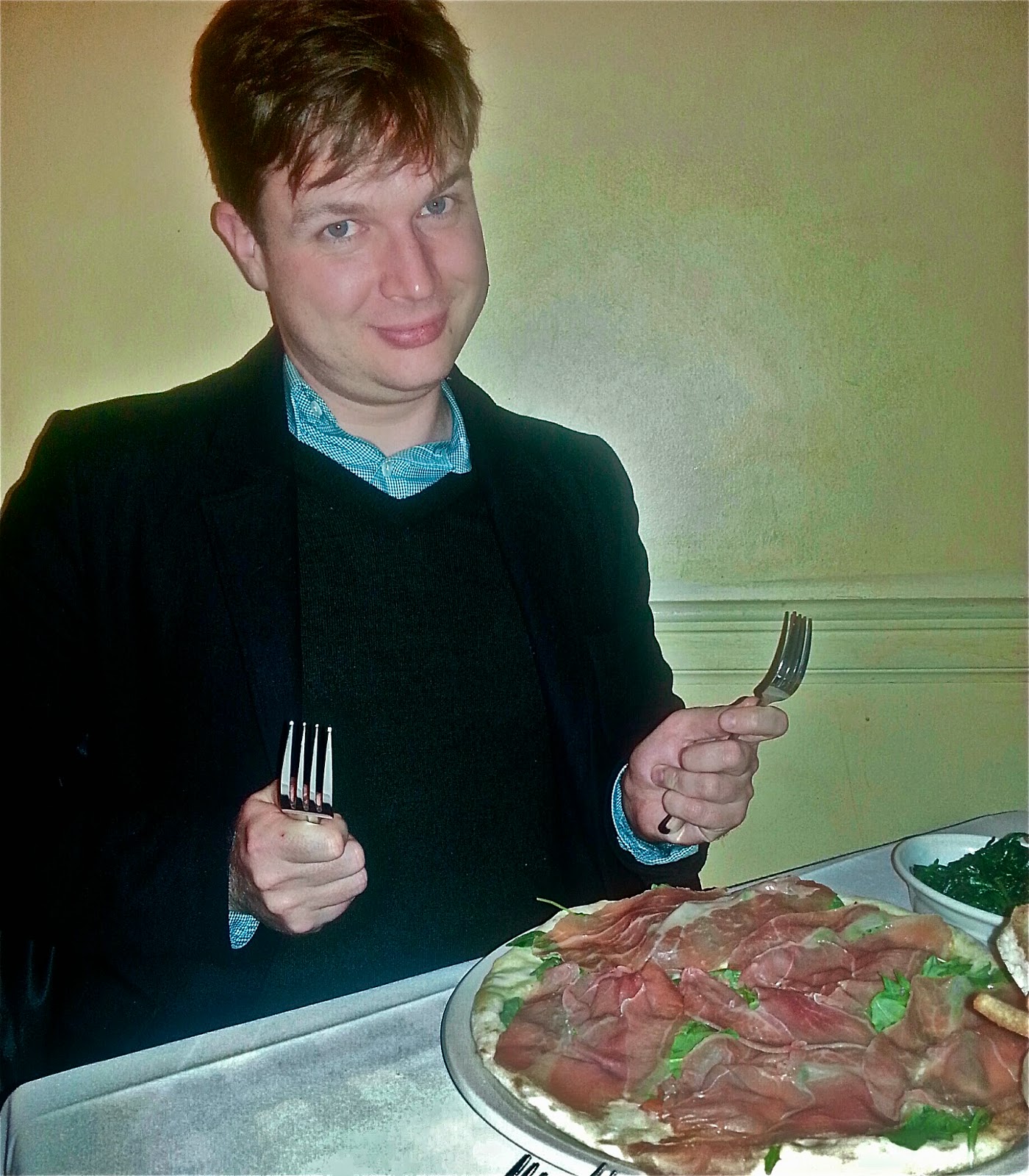 Venetian restaurant Osteria al Doge (translation: unassuming restaurant favored by the bigshot) is smack in the heart of the theatre district and dramatic whatever the time of day. Like a lot of great restaurants, the Doge has recently added a weekend brunch—Sunday brunch is after all when most New Yorkers like to go out to eat. Most of the time, the Doge is abuzz with happy theatergoers, like before Wednesday’s matinee.

Sit at a table in the romantic wraparound mezzanine and you get a sweet view of the hanging Latin candelabrum and the entire room. Seafood, meat and risottos are good value here, gorgeously presented, in big portions. Salads are heaping and colorful, and pastas deliver, such as the tender, ribbon-thin pappardelle made in-house. Individual pizza that overlaps the plate had a doughier crust than usual (note: next time ask for it extra-thin and burnt around the edges). To finish, espresso with a selection of gelato and biscotti.
Posted by Linda Olle and Jensen Wheeler Wolfe at 5:35 PM