The Heidi Chronicles and Butter Restaurant 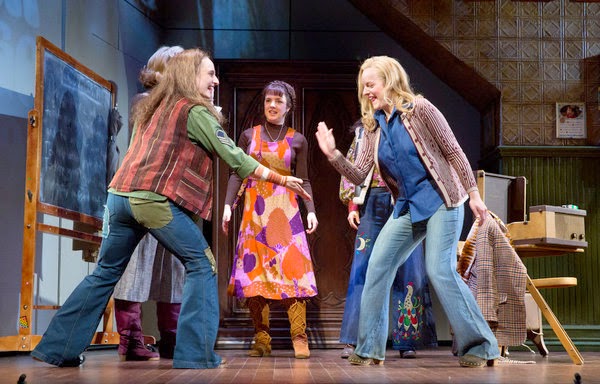 Nothing has captured the beauty and excitement of the women’s movement in the 1970s like Wendy Wasserstein’s The Heidi Chronicles. This star-studded revival leaves behind the cushy Ivy League feel of past productions and makes the revolution egalitarian. Sharp supporting roles by Tracee Chimo and Ali Ahn bolster the thrilling Broadway debut of Elisabeth Moss as Heidi Holland, art historian and trail blazer.

Heidi’s slide-show art history lesson promotes unsung women painters of the Renaissance. At a feminist consciousness-raising session, Heidi is ill-at-ease, alienated from a woman asserting independence by refusing to shave her legs (a dated reference, and the only one that may require more explanation). Participating in a morning television panel, Heidi is overlooked by the host, and the men on the panel interrupt her. She feels frustrated and insecure. Two full-strength actors portray her great friend, who is gay, Bryce Pinkham, and the manipulative boyfriend that she finally leaves behind, Jason Biggs. Songs by Stevie Nicks and Janis Joplin provide underpinning.

Elisabeth Moss is an actress for our times. She’s the liberated Heidi sort: smart, self-sufficient, considered a sport. In “Top of the Lake,” Moss's character uncovers, in the New Zealand outback, and led by Holly Hunter, an all-female utopian community living in discarded boxcars. Moss made that seem real. Her Peggy Olson grounds “Mad Men”—she adds a needed threat. Heidi Holland wins, too, but sometimes she breaks down. Moss is so affecting on stage that when her character gives a commencement speech and gets carried away and cries, sniffles could be heard around the audience.

This is an exceptional revival in every way. Pam MacKinnon shakes up this wordy, unwieldy, cathartic play. She is marvelous directing the juicy roles that every actress wants to act: Martha in Who’s Afraid of Virginia Woolf? and Heidi in The Heidi Chronicles. 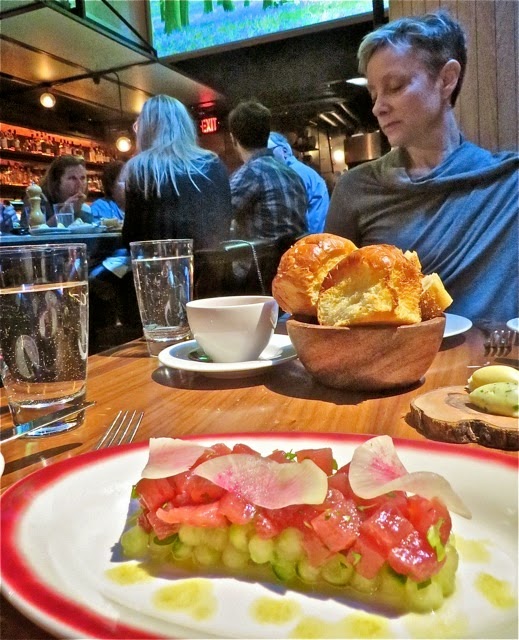 Down the street from the Music Box is Butter restaurant. Chef Alexandra "Alex" Guarnaschelli is a television star and cookbook author. Hot Parker House rolls served with herb butter begin your meal. The butter is fresh, from local Jersey cows (either from Jersey cows or from cows in New Jersey—we couldn't tell from the menu's unspecific wording). Alex may be all about comfort food, but she also wants you to try the unexpected. Butter’s menu used to include ostrich. The menu changes all the time. Her current signature main course is peppery charred whole cauliflower with braised carrots and sherry reduction.

The food looks as good as it tastes, served on a collection of vintage restaurant plates. Tuna carpaccio is in cubes on top of melon-balled cucumber. Grilled Long Island striped bass has sesame vinaigrette. Flavors are subtle, and the chef has a light touch with salt.

The former East Village location was more celebrated. Like it, Butter midtown is windowless and cavernous. You walk downstairs to a dark and woody lounge with a central core and view of shadowy foot traffic overhead. A hideout for a rendezvous and favorite for Sunday brunch before a Broadway matinee. The $35 prix-fixe lunch makes it permanently Restaurant Week (a New York City tradition that every city should adopt). Next time we’ll order the frozen toasted marshmallow faux Mallomar.

Posted by Linda Olle and Jensen Wheeler Wolfe at 5:07 PM

There is a pre-Obama retro vibe to Rasheeda Speaking by Joel Drake Johnson. Timid, white Ileen, played by Dianne Wiest, is asked to spy on and list the infractions, like arriving late to work, of her black co-worker, Jaclyn, played by Tonya Pinkins, building a case for human resources to fire her. Jaclyn has just taken time off work after having an allergic reaction to the Xerox machine that sits next to her desk.

Dr. Williams (delightfully unctuous Darren Goldstein) condescends and offends both women, including speaking with Jaclyn in jocular black dialect. He flatters Ileen and rewards her with the title “office manager.” The employees are obliged to flatter him. He loves for Ileen to tell him, “I love my job. I love working for you.” To Jaclyn, he asks, “Do you think I’m fat?” She offers him donuts and gives him a Hallmark card in which she has written, “You are not fat.”

The windowless Chicago doctor’s office (marvelous set by Allen Moyer, fluorescent lighting by Jennifer Tipton) is decorated with wilting philodendrons and a Georgia O’Keeffe flower poster from the Chicago Art Institute. It’s a chillingly lifelike set for a ninety-minute master class in acting, each moment coached with humor and infinite finesse by first-time director Cynthia Nixon.

Ileen feels terrible about what she has become. Another brilliant actress, Patricia Conolly, plays Rose, a delicate elderly patient. Because she is clueless, her racial epitaphs (“It’s like they’re paying us back for slavery”) float past unacknowledged. Jaclyn is indeed in a toxic environment. You can probably guess which one of them winds up leaving.

Established in 1978, West Bank Café has a dedicated following and is difficult to book before or after a play. The reason is the food, and for instance, kale salad—now on every menu across town—is ingenious here, mixed with grilled octopus, radishes, and smoked salted almonds. A 3-course prix fixe for $35 gives as a main course salmon or chicken with abundant vegetables. Entrees include rainbow trout piccata and black linguini with rock shrimp, and desserts, hot chocolate bread pudding with vanilla ice-cream and caramel. The cocktail menu sounds delectable and wine by the glass is good value.

West Bank Café has a downstairs space, the Laurie Beechman Theatre, where many great performers have done shows, including, as recently as 2013, Joan Rivers.
Posted by Linda Olle and Jensen Wheeler Wolfe at 6:17 AM