THE DRESSMAKER’S SECRET and Rôtisserie Georgette 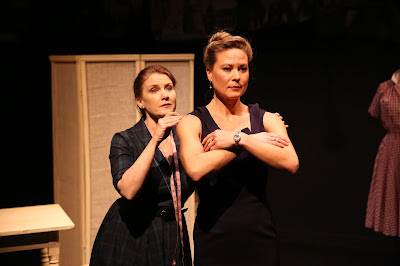 A dressmaker, played by Tracy Sallows, raises her nineteen-year-old son (Bryan Burton) in post-war Romania. Robi is fascinated with all things Western and has his sights set on America. His mother, of course, prefers that he stay at home.

When Irma, a member of the party visits to have a dress made, Maria is anxious and fears surveillance. Irma’s brother (Robert S. Gregory) is likely the boy’s father. After two decades, he wants forgiveness and his sister to set the record straight. Irma’s own intent is a real surprise.

Confessions are made and hurts uncovered. Sallows is grounded and complex as Maria. Irma (played by Caralyn Kozlowski) is strong as Maria’a old friend, dodging self-disclosure.

With Cold War surveillance a hot topic, this ambitious play co-written by Sarah Levine Simon and Mihai Grünfeld (who has his own story about escaping Romania as a young man) is timely. The 59E59 Theaters fearlessly take on political subjects, including a very well-praised play by Jeffrey Sweet about lawyer and Constitutional civil rights activist William Kunstler played by Jeff McCarthy. 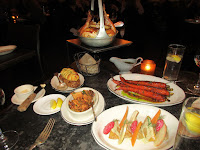 Rôtisserie Georgette is a short block from the 59E59 Theaters. Tall ceilings and a baronial atmosphere were most inviting on a cold winter night. “It’s Louis XV meets the kitchen,” says the founder Georgette Farkas.

The bronzed rotisserie chicken is delicious all on its own, without the dipping sauces, as is the duck in a bitter orange sauce. Twice-baked potato is another specialty and beautifully presented. Two all-star sides were the stack of maple-roasted carrots with grain mustard and the wedges of golden winter beets, granny smith apples and mimolette cheese. We didn’t have time for dessert but were recommended the pot de crème au chocolate, served in the mug it was baked in.   JENSEN WHEELER WOLFE
Posted by Linda Olle and Jensen Wheeler Wolfe at 9:03 AM