On the Town and Carnegie Deli 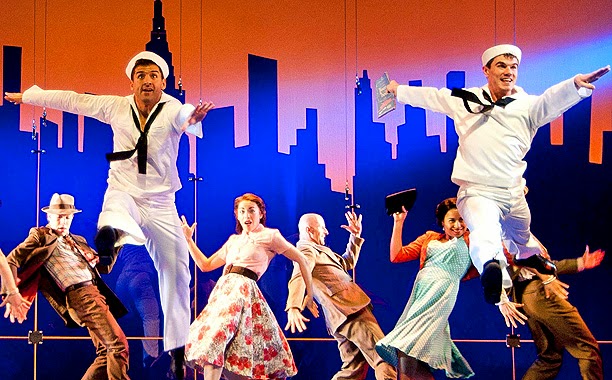 On the Town has music by Leonard Bernstein and a book and lyrics by Betty Comden and Adolph Green. You've probably seen the 1949 MGM movie filmed on location. Sailors on a 24-hr shore leave must see the whole city and find a date. The Manhattan women they meet are not a bit shy and include a taxi driver, an anthropologist, and a dancer. These sailors could not possibly get more lucky. If anything dates the tale, it's perhaps how gosh golly happy they feel, and that happiness is contagious.

Bernstein's music performed by a full orchestra is so fresh that the songs feel new. Written several years before his West Side Story, On the Town might be the sparkier of the two, you think, after seeing this stellar production. Dancing choreographed by Joshua Bergasse is spectacular. The pas de deux with Megan Fairchild and Tony Yazbeck in Act II made us forget the Gene Kelly version. Alysha Umphress, the taxi driver Hildy, is a hoot in "Come Up to My Place" and the careening ride around town with her new love interest, Jay Armstrong Johnson. The scene in the Natural History Museum, Elizabeth Stanley's "Carried Away" with her new supplicant, Clyde Alves, is the coolest version of this female empowerment number that we may ever see, and "Lonely Town" was never more haunting. Jackie Hoffman in her many hats, who this reviewer met during her Second City days, was perfectly silly.

Could have done without the American flag curtain and "Star Spangled Banner," but maybe that's just us. On the Town is playing in the massive Lyric. Thin menus attached to the seats offer seat service at intermission for drinks and snacks. We'll have two Brooklyn lagers, a large Brooklyn Popcorn, a bag of North Fork Chips, and Tate's chocolate chip cookies, please. 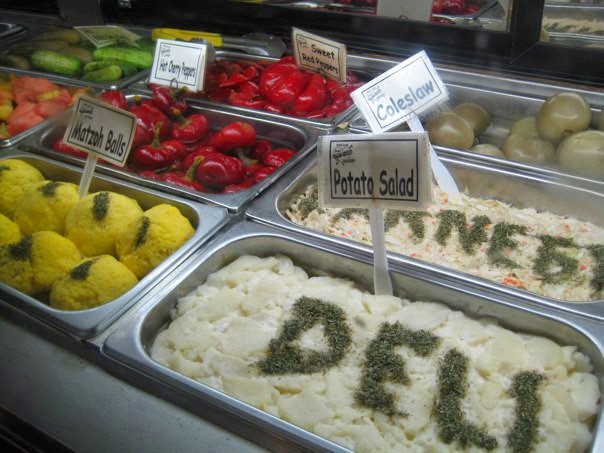 Not much of an appetite after dinner, a mile-high pastrami sandwich at the non-kosher Carnegie Deli. You might know this tourist hotspot, which opened in 1937. It never fails to be a warm and friendly slice of Manhattan, around the corner from Carnegie Hall. (The joke goes, out-of-towner asks, "How do you get to Carnegie Hall?" The answer: "Practice.") There are wheeler dealers here and also just simple folks like us, who come to share a sandwich, complimentary pickles, coleslaw, and sterling conversation with native New Yorkers. It's relatively expensive, but you can have lunch for an entire week on sandwiches and salads made from ample leftovers. Carnegie Deli's mustard is particularly good, and they deliver, so ask for extra mustard and pickles.
Posted by Linda Olle and Jensen Wheeler Wolfe at 7:02 PM

Side Show and Joe Allen 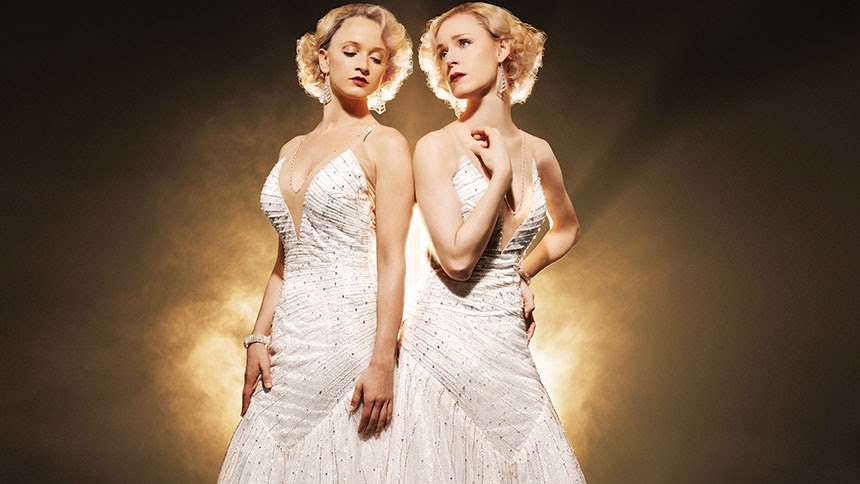 Set in the 1930s and based on the Hilton sisters, Daisy and Violet, conjoined twins, Side Show opened and tanked after a matter of weeks, just as it did in 1997 when this full-blown musical premiered. Side Show is teeming with powerful love songs, however it is doomed by its subject: the darkness of the lives of side-show performers. A corny subplot involves a forbidden love interest. Jake, a black man, appears in the circus as the “cannibal” and is their one true friend. David St. Louis is absolutely gorgeous when he sings of his love for Violet. He's sure to get a Tony nod in spite of the show's closing within minutes.

Erin Davie as Violet and Emily Padgett as Daisy are marvelous and deserve Tony noms too. Violet and Daisy are discovered by a vaudeville producer who helps them create a name for themselves on the stage. Additional love interests are the producer and dance captain. Robert Joy is evil Sir, the Joel Grey-ish sideshow manager with fancy manners. We embrace his demotion to coffee boy for MGM when the sisters go on to appear in a movie. The lighting by Jules Fisher and Peggy Eisenhauer was dramatic and memorable.

The story has great heart and it’s engrossing in spite of a slow pace. Side Show has reportedly been successful in regional theater. The creation of Bill Russell (book and lyrics) and Henry Krieger (music), you have to give them credit for taking “difference” as a theme and running with it.

Joe Allen descends the stairs and has breakfast while reading the drama criticism in all of the newspapers every morning. He has a soft spot in his heart for the plays that close on Broadway. His star-studded restaurant is decorated with posters of plays and musicals that have bombed. The poster of Side Show is at the framers' shop now. The actors who eat at his restaurant are the ones appearing, for however long, in plays nearby. It does not feel touristy, 'though undoubtedly many tourists who love Broadway gravitate. Waiters are attentive and get you out in time for the curtain. The diners who really enjoy Joe Allen stick to a few dishes on the menu. House-made paparadelle is pretty delicious, and the dark crusty bread in the bread basket accompanies it well. Lobster roll is really good, but especially the Joe Allen hamburger, served medium-rare, with toasted bun and pickles, has a dedicated following. The spinach side dish is fluffy and a triumph. Popeye would adore this place. But the best is that at Joe Allen's bar or table area, you mix with marvelous New Yorkers. 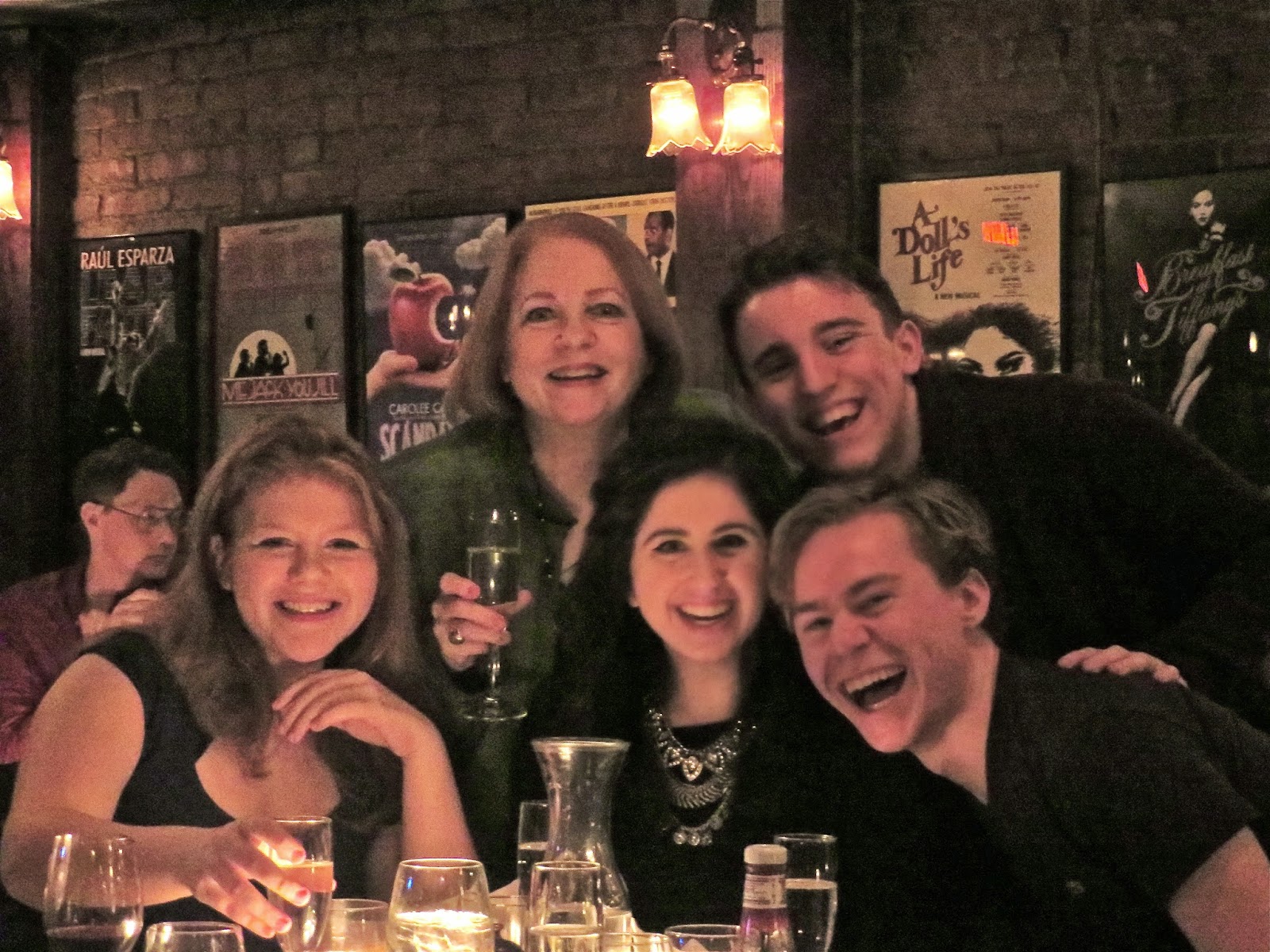 Here are the charming actor types enjoying Joe Allen's at the table next to ours. When they were posing for a group selfie we intercepted this group portrait. Wait, isn't that a phenomenal stage and screen actress we all know standing in the back row?

Posters behind them include that brief sensation, the musical based on Truman Capote's Breakfast at Tiffany's.
Posted by Linda Olle and Jensen Wheeler Wolfe at 12:46 PM