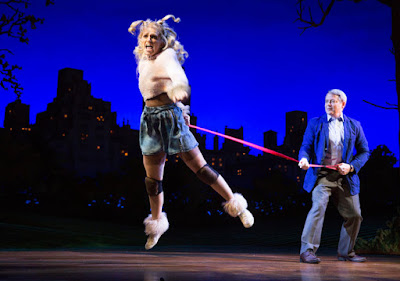 Written before the rescue dog renaissance, yet anticipating it totally, Sylvia is A.R. Gurney’s most beloved play. This beautiful revival should satisfy the 1.1 million dog owners in New York City. The stray poodle mix that Greg (Matthew Broderick) picks up is rejected for every reason by his wife Kate (Julie White). West Siders who live along Central Park, the play has that romantic backdrop—a lower skyline from 1993, and moves on through Bill Clinton’s re-election, with references to Kitty Carlisle Hart and Bella Abzug.

Many couples can relate to the jealousy that erupts when a dog is brought into the equation. Kate wishes that it were an affair instead: “Any wife worth her salt can manage that.” Really? And was the play’s transgender shrink (Robert Sella, who plays three characters, including a female and a male), added to keep up with the times? But that gives Sylvia some meat.

Even Broderick’s heartthrob boyhood roles contained a layer of irony that is denied him in the part of Greg—he might do better switching parts with Julie White, what with White's real-life love of dogs and Kate's Shakespearean histrionics. Also straining at the leash, Annaleigh Ashford plays the poodle Sylvia with genius comic timing and maximum lovable-ness. (It’s a tough part that was also well played by Broderick’s partner, Sarah Jessica Parker.) Wish we saw Ashford’s Tony turn in You Can’t Take It With You; her transcendent working-class girlfriend redeemed Kinky Boots for us. We loved those Welsh Corgis in last season’s The Audience. The addition of a real dog or two in the park scenes would make us like this Sylvia even more. 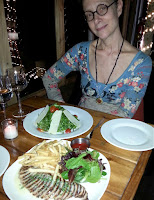 Around the corner from the  Cort Theatre, Haven Rooftop is a year-round outdoor rooftop restaurant open late, and a young person’s hangout with both loud music and great food—a combination you don’t often find.  Havenly Chicken is a well-seasoned, fanned-out chicken breast in beurre blanc, with tender mesclun salad and a heap of fries. (It was enough to share, only $21.) Arugula Parmesan, “Holy” truffle fries and the stacked crab and avocado appetizer were delicious, and the shrimp and shaved Brussels sprouts another inspired combination. With a spiky midtown view of skyscrapers and Gothic church, and a transparent ceiling, we’ll return one day when it’s snowing and sample the winter menu.


Posted by Linda Olle and Jensen Wheeler Wolfe at 11:21 AM

The Flick and the Little Owl 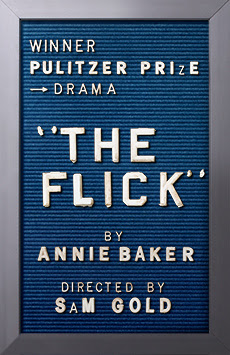 The Flick is set in a small cinema in Worcester, Massachusetts, with three complex characters in low-paying jobs: two male ushers and a woman with green hair who runs the reel-to-reel projection booth. The new usher Avery (Kyle Beltran) is black, sensitive, a student and cinephile living with a father who teaches at Clark University. Rose (Nicole Rodenburg), the projectionist, shares an apartment, is in default on college debt, and rarely makes eye contact. Maybe it’s the script or the director’s fault, but Rose remains an island even when she comes on to one of her co-workers.

The usher Sam, age thirty-five, lives at home and is the unselfconscious type who stands with his mouth open while he thinks. Sam, too, is a cinephile, who believes Avatar was a great movie. Danny Wolohan is courageously real and stunning in the role, even as he wrings out the mop in a bucket and scrubs the floor. What a sensational actor.

The well-lit set is perfect, with worn pink seats, ugly gold and brown walls, and stained, white pebbled ceiling panels. It is ambitious in this era of speed to do a long-format play, and Annie Baker’s creative risk lead to a deserved Pulitzer Prize. At three hours with intermission, The Flick is longer than a movie. Baker tortures her audience a bit with the frequent sweeping up of popcorn off the floor, and the scaly rash on one of her characters’ neck and back, and the many real-time pauses. Darkness contrasts with light-hearted music from François Truffaut’s Jules and Jim.


The Little Owl, with blue awnings, is on an idyllic corner of the West Village. The food is justly celebrated, prices are fairly moderate, and portions are righteous. The petite hamburger (or slider, if you insist) is kind of exquisite, with fennel notes. Seasonal basil gnocchi was in a meat accented fresh tomato sauce. Truffle risotto is heady, with an organic egg yolk on top. The fresh tasting crabcake is served on crunchy greens in champagne vinaigrette. Signature dishes are the pork chop and lamb chops grilled in honey barbeque. One of the desserts is light beignets served with nutella and raspberry sauces. Our only complaint was that the rhubarb crisp wasn't crispy enough. Otherwise the Little Owl treated us wisely. Book in advance.
Posted by Linda Olle and Jensen Wheeler Wolfe at 10:42 AM