A Delicate Balance and Frankie and Johnnie's

Agnes and Tobias’s luxurious house (scenic design by Santo Loquasto) has alcoholic sister Claire living upstairs. But never mind, a martini “dividend” is always on offer, even in the morning, from a well-stocked liquor caddy next to the black marble fireplace.

John Lithgow plays Tobias with restraint and muffled charm. He is nicer than he should be, and he can’t help it, as when sister-in-law Claire requests a drink. His best friend and the irritating wife, Harry and Edna (Bob Balaban and Clare Higgins) turn up and ask to stay over, because of an unexplained “terror” back home, and Tobias can't say no nor do anything to set a departure date. Lithgow is lovable in the part of unconditional friend, and he's the best at striking a delicate balance.

Glenn Close’s Agnes is admirable rather than lovable. Others have played Agnes as passive-aggressive. This Agnes stands by her man, even though she expects more of him. Close is unexpectedly just a little bit boring. Perhaps it is not Glenn, but the part of Agnes. You want her to let it rip, but she never gets the chance. (See Glenn Close fully expressed in the 1991 opera film "Meeting Venus," by Istvan Szabo.)

Martha Plimpton is daughter Julia, who arrives home after her fourth marriage has collapsed and expects more sympathy than she gets. We’ve loved Plimpton in films and on television, but on stage she is truly amazing. Her angry Julia provides catharsis in a play reined in by politeness, and she also grounds the play.

As to Lindsay Duncan as Claire, she makes a beautiful entrance, drunk and contrite. Thereafter, the audience liked everything she did. Even her “Are we having our dividend?” and “By golly, that’s a good martini,” got belly laughs.  The only thing that dates Edward Albee, perhaps, is his tolerance for drinkers.

Albee lives in a loft in Tribeca and continues to refine his plays, as he did a couple of seasons back adding a cell phone to Who’s Afraid of Virginia Woolf? Albee has certainly earned his dividend. Pam MacKinnon directed both. 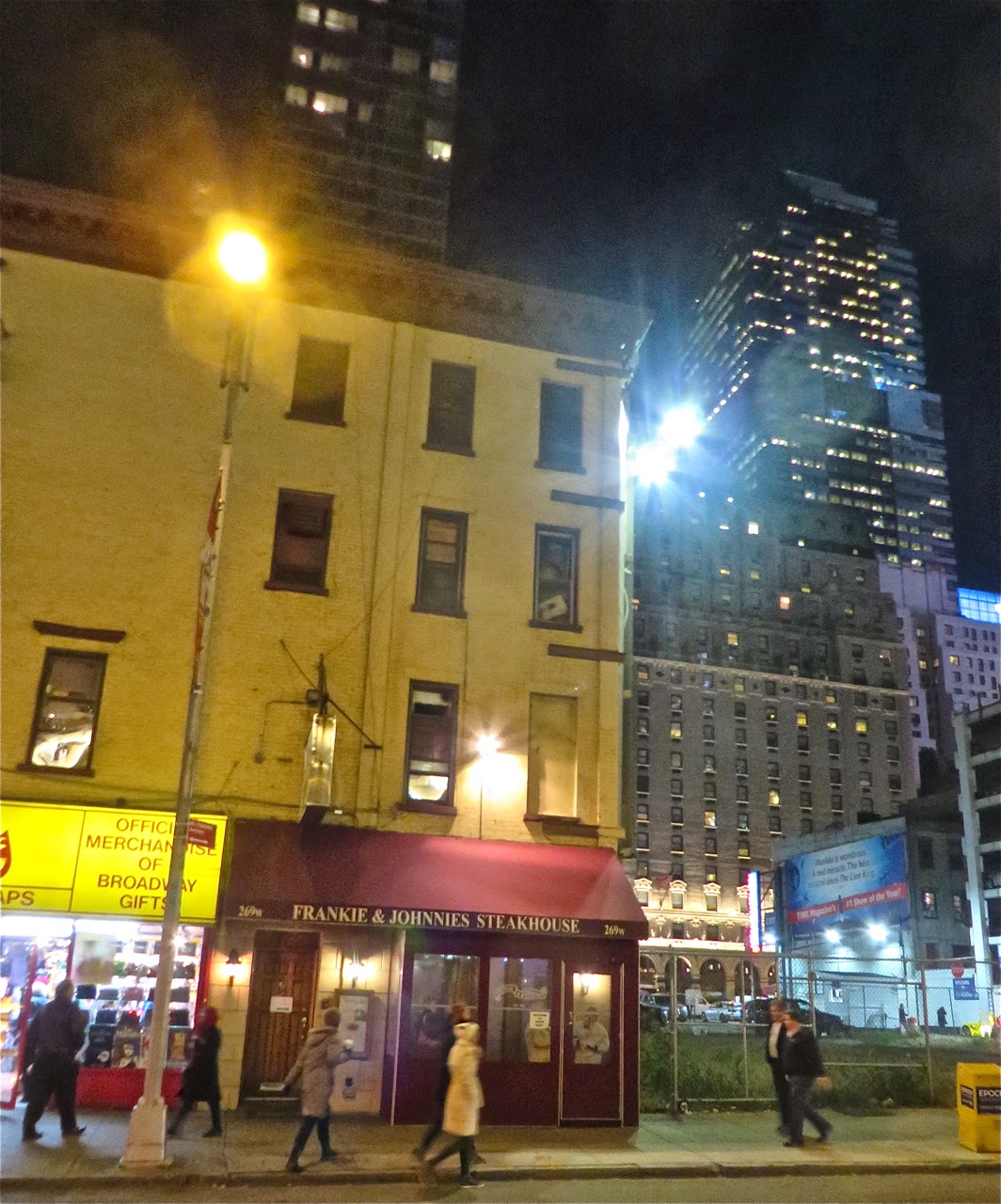 Across the street from the Golden sits a small chophouse, Frankie and Johnnie's, that has been booked every night of the week since the 1920s when it was a speakeasy. One of the oldest restaurants in town, it is full of nooks and crannies, including an intimate upstairs bar papered with photos of celebrities who have dined there, including Thelma Ritter. Nothing has ever changed. You enter a snug time capsule.

The menu lists clams casino, lamb with mint jelly, creamed spinach, big portions, and huge grilled steaks. Your waiter wields a rubirosa pepper mill. "Would you like your steak medium rare?" he suggests. And who would not? The $47 sirloin had a delectable thick charred crust. Caesar salad was old-fashioned, eggy and salty with anchovies, and there was a generous bread basket. With potatoes made eight different ways, the French fries were chewy and just outstanding. In all but price, F&J's compares to the dreamy era of "Mad Men."

It is bustling and full of good cheer that dates back a long, long time to before you were born. Say hi to waitress Roxy for us. During Prohibition, one gained access with the password "Frankie?" and the person on the other side of the door responded, "Johnnie."
Posted by Linda Olle and Jensen Wheeler Wolfe at 5:10 PM 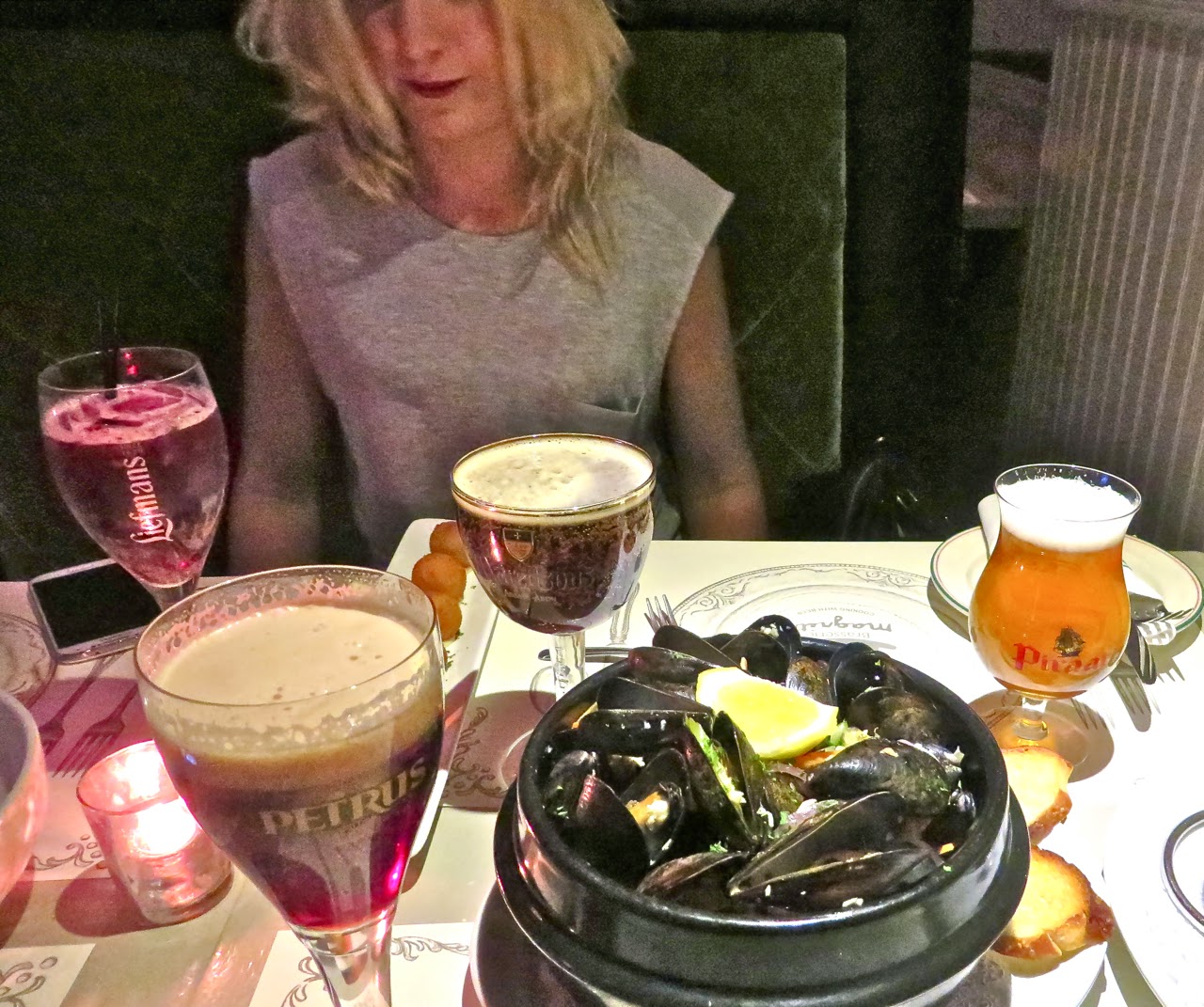 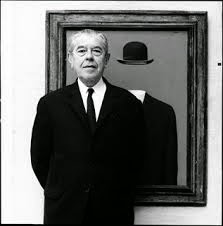 Brasserie Magritte is a loving homage to nearly everyone's favorite artist. The ceiling is a bright mural of clouds. There is a chandelier of floating bowler hats. Art on the walls includes work by a contemporary Belgian photographer that restages the paintings of René Magritte (1898-1967). Every detail is so charming, including the optical illusion placemats.


Chef Shohn Donaghy and the staff are from Belgium. Sausages are made on the premises. Mussels are steeped in a beer butter sauce and come with a cone of twice-fried crispy frittes, served with garlic mayonnaise as well as catsup. Belgian beef stew and rabbit and duck are in beer reductions. Brasserie Magritte regularly holds a mysterious 14 Strangers Dinner in its back room, with fourteen diners who have never met and an array of their classic Belgian dishes. (Our names are on the waiting list!) Background music is a carefully curated selection of mostly jazz and Edith Piaf. A massive chalkboard lists the Belgian beer served, each is served in its own exquisite stemmed glass. Significantly, Heineken cannot be ordered there. "There are just too many other great Belgian beers," said the manager. 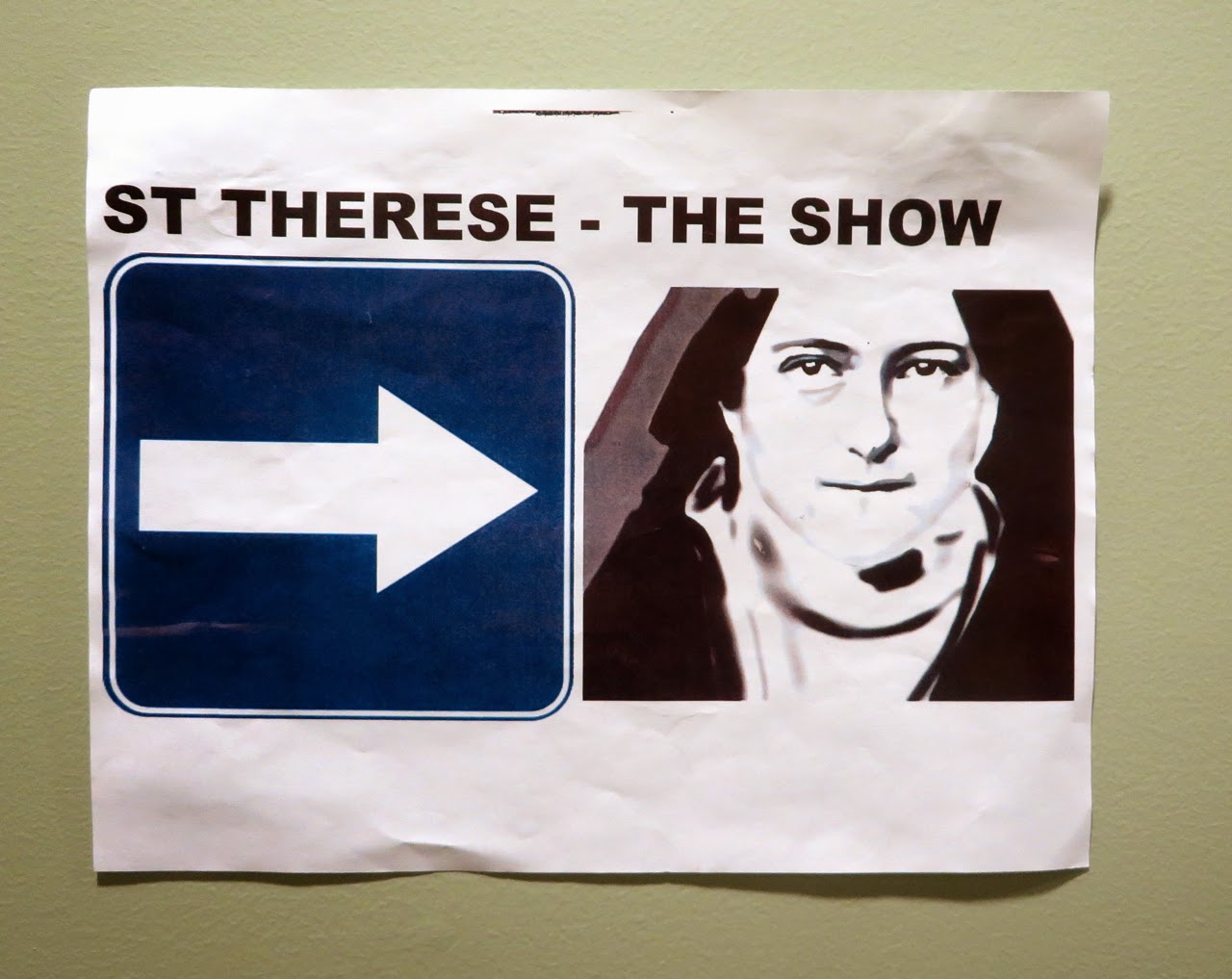 A short walk from the Upper East Side Brasserie Magritte brought us to Our Lady of Good Counsel Roman Catholic church. No, not to pray, but to attend a traveling show based on the short but influential life of Saint Thérèse of Lisieux (1873-1897). St. Thérèse was born into an aristocratic family. Although she died at the age of twenty-four she left behind an influential autobiography and is known as the saint that writers evoke to cure writer's block. In sleepy St. Patrick's Cathedral, her small altar near the apse is a hive of activity with blocked writers of all faiths making offerings and kneeling to light a votive candle.

St. Thérèse is evoked by opponents of the death penalty for her radical belief that a person may do something bad, but it doesn't mean he's a bad person. She found evidence to prove that there is some good in everybody. Michel Pascal, a remarkable singer, offers a chance to touch her brown robe and to view up close a reliquary of Thérèse’s hair. He takes you behind the closed doors of her Carmelite convent and makes you feel "closer to her than you have ever felt before."

Posted by Linda Olle and Jensen Wheeler Wolfe at 6:53 AM