Carol Burnett in her television show made outrageous fun of American types and celebrities in a timeless way. At the end she’d walk out as herself, in a gown by Bob Mackie (known for dressing Cher; Carol wore “a thousand” of his gowns and costumes). She would then take questions from the studio audience. This is recreated in the current show of remembrances that Burnett is taking around the world, with a new memoir, In Such Good Company.

Her New York City audience gave a standing ovation the moment she stepped out on stage, and their reactions were extravagant and out of control from then on. Carol Burnett at age 80-something delivers a Tarzan yell and an uncanny imitation of the voice of Jimmy Stewart, her girlhood heartthrob.

Questions from the vast Beacon Theatre audience on a night of the full moon included a person in the upper tier who uncomfortably asked whether, knowing what she knows now, she would have done something different as a mother. There was a sharp intake of breath from the audience—we knew her late daughter Carrie was afflicted with drug and alcohol dependence. Carol’s response, “No, nothing,” cut through the tension.

She said that her TV show (1967-1978) almost did not get off the ground because producers had cold feet, until the last minute. This major feminist point was probably lost on our younger critic, Arden Wheeler Wolfe. Instead, Arden was riveted by the costumes. Carol Burnett indeed has always been as svelte and upright as a haute couture model, the better to wear a thousand Bob Mackie gowns, with (we’re guessing) Joan Rivers’ stamp of approval on every one. “She looks like a sixty-year-old,” judged Arden, Jensen's ten-year-old.

Burnett reminisces with patched-in video of sketches and guest stars (Gloria Swanson! Maggie Smith! Madeline Kahn! Steve Martin! Betty White!). Asked if there is a film or TV program she would parody today, Carol answered, Keeping Up with the Kardashians. Her fans know that she would nail reality TV in her subversive, joyously scabrous way. She makes parodists today (apart from Tracey Ullman, perhaps) look too safe.

Carol acknowledges a debt to the other comic geniuses on her team: Vicki Lawrence, Tim Conway, and Harvey Korman. At the end she sings “I’m So Glad We Had This Time Together,” sign-off of The Carol Burnett Show, and she pulled her ear lobe, the secret greeting she made at the end of every show to her grandmother, who brought her up. (Anyone who has read the account of her poverty-stricken Dickensian childhood never forgets it.)

Grateful to have been in the generous presence of Carol Burnett, we’re so glad we had this time together—actually, it felt magic. Get tickets if she’s coming to your town. 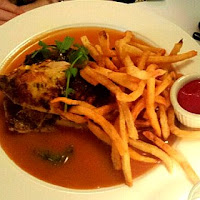 Like the country of Luxembourg, Cafe Luxembourg is tiny and pretty. It gets a pre-concert crowd and is always packed. The food is very good and priced accordingly. You’ll be happy if, price-consciously, you stick to the yellowfin tuna burger (with wasabi dressing, served with frites or salad), or the Luxemburger, served all day, or the roasted chicken in Dijon sauce (left) that is served with the beautiful frites, a bargain on the evening menu. The grilled octopus with Moroccan salad was extraordinary. Wish we had room for the pan-roasted lamb chops with zucchini blossoms or any of the classic French desserts. Cyndi Lauper was eating there on a recent night, in white tasseled earrings, looking so fab. (Yes, Cyndi, girls just want to have fun, you were so right about that!)

Café Luxembourg opened in 1983 and restaged a Brassai photograph of three fleshy women wearing only their shoes, standing at the bar with their backs to the camera. Clever marketing, and when you get your tab at the end of the meal at Café Luxembourg, you receive chocolates wrapped with the famous photo.
Posted by Linda Olle and Jensen Wheeler Wolfe at 8:32 AM