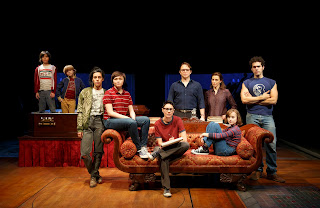 Alison Bechdel’s graphic coming-of-age Fun Home creates an idyllic childhood world. Each member of the family works happily on art projects in their own rooms, in a sprawling, antique-filled Gothic revival house. Circle in the Square theatre-in-the-round oddly fits the bill in creating the foundation. A girl and two boys. A mother who acts in regional theatre and an attractive father who is an English teacher and a family funeral home director (where we get “Fun Home”).

Three actresses play Alison Bechdel at various ages. Beth Malone is the present day Alison who narrates from her drawing desk. In a key scene (no pun intended), the child Alison (Gabriella Pizzolo) notes an attraction to a capable-looking girl with a ring of keys hanging from her belt—“Ring of Keys” is one of several heart-stopping ballads that will have you reaching for your handkerchief. At college, Alison has her first romance with a girl, Joan (the lovely Roberta Colindrez) and sings “I’m Changing My Major (to Joan).” It’s a sexy scene for the theatre, and over and over you admire this team for their honesty and commitment!

A sensational Emily Skeggs plays college-age Alison as the girl you wish you knew when you were in college. In coming out to her parents (by post) Alison is disappointed by their slow reaction. Then she learns why—her mother (Judy Kuhn) reveals that Daddy (lovable Michael Cerveris) has always been attracted to men, including the family’s heretofore beloved gardener. The gardener and all the young boyfriends are played by a sympathetic Joel Perez, who looks straight out of a Tom of Finland drawing.

How rare to be at a musical that shares ideas that you were never offered before. The memoir Fun Home is sad. You leave the Circle in the Square with a lump in your throat, but feeling better and more hopeful about the future. It’s very funny at times and consistently a triumph of everyone involved. Music by Jeanine Tesori, book and lyrics Lisa Kron, directed by Sam Gold, based on the graphic novel by Alison Bechdel.

The James Brown Soul Revue was warming up at Lucille’s when we walked in. The sound was amazingly authentic, and when James Brown impersonator Lloyd Diamond, in a red jumpsuit, came out dancing, the illusion was complete. Fred Thomas, who leads the six-member band, was James Brown’s principal bassist from 1971 and drummer Tommy Greene also played with Brown’s original group. We were swept away by this incredible entertainment for a small cover charge over a pre-show meal. But we know that Lucille's regularly features the most impressive entertainment. What a nice way to reward yourself for starting the week on the good foot: Bluesman Jon Paris plays on Mondays with bassist Amy Madden and drummer Steve Holley.

Sunday's popular, powerful Harlem Gospel Choir brunch includes bottomless mimosas and a limitless buffet of Creole and Southern classics. At nighttime chef Wenford Simpson does a steaks-and-BBQ menu, but with flourishes, like the grilled lemon slices served with salmon, green beans, and rice. Most were ordering the hamburger plate, so that had to be very good too.

Posted by Linda Olle and Jensen Wheeler Wolfe at 5:08 PM