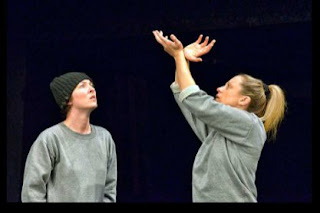 Developed at a women’s prison in the north of England, the one-hour Key Change moves quickly as actors sketch out common prison scenarios (fights for the phone), regrets (poor choice in men) and longings. The newbie, Lucy, played by Cheryl Dixon, is protected by feisty Angie, brilliantly played by Jessica Johnson, who pledges to stay out of trouble when she’s released (this is her third bout in prison).

Kelly (Christina Berriman Dawson), brings poignant humor when she acts out the abusive boyfriend or pusher in the women’s backstories. They return to a bad situation because they have nowhere else to go. The stories are sadly similar: knocked up young, no money, bad partners, petty crime, jail, prison. The eldest, Kim, well-played by Judi Earl, is waiting out her sentence with apparent good nature and skill—but don’t mess with her when she’s on the phone to her grandchild!

Key Change, by Catrina McHugh, an Open Clasp Production, won a Best of Edinburgh Award and tours prisons. It’s magic when the women’s letters from family turn into birds, so strong are the worlds of dream and fantasy. Gentle segues and two brutal fight scenes are smartly paced under the direction of Laura Lindow.

Spoken in Geordie, the dialect of Northeast England, rather than in the silky tones of Queen’s English on Downton Abbey, we missed a full ten percent of the play. A glossery of prison lingo (“zoppie” for pharmaceutical drugs, a prison’s favored currency) is included in the program. For a more immersive experience, on display is a real prison cot in a six-by-eight-foot cell demarcated by masking tape that you can try out.
On the edge of Chinatown, Dirt Candy serves vegetables in ways designed to blow your mind, and regularly succeeds. Entrées are named for the veg: Carrot (carrot sliders on a sesame seed carrot bun), Broccoli (a broccoli “dog” served on a bun, with mustard barbeque sauce) with vinegared, freeze-dried broccoli rabe leaves. Cauliflower (curried cauliflower with papaya chutney and pappadam), etc.

You arrive to complimentary hot bread in a weave of vegetable colors and flavors: carrot, beet, celery, spinach. Every dish we tried we loved, except for Potato (warm potato salad with olives, bitter greens and yams) which had good textures but tasted bland at room-temperature. The limitations of titling the dishes simply is apparent in Brussels Sprout Tacos (no, thank you). Rutabaga torte was a revelation, a ginger and sage mille-feuille layered with smoked cream cheese and mustard, and topped with candied rutabaga.

Amanda Cohen, chef and owner, wants you to taste something you’ve never had before, and all safe and healthy. (To avoid crazy prices, Cohen’s food for the most part is not organic.) The margaritas are refreshingly different: mezcal, infused with yellow and guajillo peppers. Each drink and dish is Instagram worthy. Although the restaurant’s name, Dirt Candy, evokes an earthy bowl of beans perfumed with garlic, in none of the dishes did we taste even a hint of garlic. Beans were part (a minimal part) of only one vegetable entrée (Fennel). Lemon, yes. Ginger, yes. But nowhere did we taste soy or injudicious use of sugar, salt, pepper, or peanut. Desserts include the lauded Onion Chocolate Tart and Carrot Meringue Pie with Sour Cream Ice Cream.

The servers were great and the ambience too. We prepared to leave a big tip, only to find that Dirt Candy, an innovator in all matters, embraces the new ban on tipping that a few restaurants have adopted. (A twenty-per-cent gratuity is added, divided among wait staff and the kitchen.)
Posted by Linda Olle and Jensen Wheeler Wolfe at 6:20 AM